Understanding Islam in America: Mercy, The Stamp of Creation

Every 1st and 3rd Friday of the month (Biweekly | First lecture on Oct. 1st )

Shaykh Jamaal Diwan is the co-founder and Religious Director of The Majlis. Shaykh Jamaal was born and raised in Southern California to parents from Newfoundland and Pakistan. He grew up playing basketball and listening to Hip Hop. He accepted Islam in 2003 while at UCSD. After getting married and graduating from UCSD in Third World Studies, he and his wife moved to Egypt to study Arabic and Islamic Studies. He stayed there for the better part of the next seven years finishing an undergraduate degree in Sharia from al-Azhar. During that time he also completed two years of graduate work in Islamic Studies from the American University in Cairo. Upon their return he served as a religious teacher and instructor in Southern California and later served as the Resident Scholar at the Islamic Center of Irvine from 2012-2014.

He helped start the IOK Chaplaincy program which began at UCLA and USC and eventually grew to cover seven college campuses in Southern California. He directly served student bodies at UCLA, USC and UCI. In 2017, he and his wife, Shaykha Muslema Purmul, co-founded The Majlis seeking to nurture safe community spaces where people can learn and live Islam, based on the traditional sources of understanding the faith, while acknowledging the particular challenges of the American context. The Majlis focuses its efforts on religious education, spiritual refinement, love, and service. He continues to serve the community as Religious Director at The Majlis and is a father of two, residing in Southern California with his family. 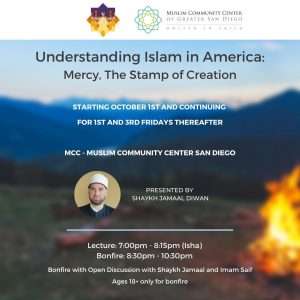