Prayers for Palestine: Healing and Resistance

You are here:
We saw thousands come out to protests, millions posting online, many signatures signed, and petitions formed masha’Allah — but what comes next? Before moving forward, let us educate ourselves and revisit the robust, Islamically-oriented epistemology around the cause of Palestine. For us as an ummah, it is beyond a secular, nationalistic, leftist cause. In fact, limiting it solely to this context is simply a tool of continuing the colonizer’s domination over the colonized. The sanctity of Islam’s third holiest site and what surrounds it is linked to our ‘Aqeedah and it is integral to the story of Islam and Tawheed. The brutal occupation of Palestine and the recent murders of Palestinian people concerns every Muslim with the Shahadah in their hearts. As such, when confronted with the settler-colonial project that is Israel — a secular power that inherently serves to curtail Islamic growth, strip Palestine of its Islamic identity, and act as a satellite state for the imposition of US hegemony within Muslim lands — the obligation of resistance is a duty placed on every Muslim.
Join us at MCC on Sunday, June 13, 2021 for an evening of prayers and a teach-in:

In preparation for the event, we encourage attendees to read the following article on Islam, Palestine, and the settler-colonial project: https://www.criticalmuslimstudies.co.uk/palestine-and-the-question-of-islam/

and listen to a Qarawiyyin Project podcast on Palestine – the Realpolitik and Revelation by Dr. Ayesha Wazaz https://open.spotify.com/episode/3XwIVsCoAXP5ZxW5Bj23sE?si=VPkLGEZhSrO_B5gLZOQtKQ 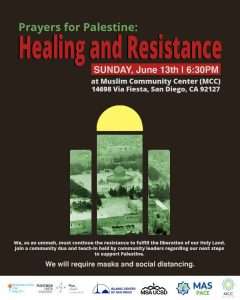